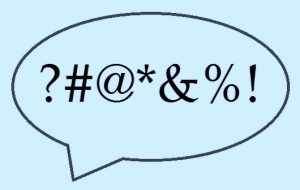 Language is Acceptable to Media

Yes, transiting Uranus and Pluto have suddenly (Uranus) altered what words are acceptable to the masses (Pluto) in our shared mediums.

Haven’t you noticed that since Uranus and Pluto have been at a right angle to each other (squared) for the past two years the increase in acceptability of the words “ass”, “balls”, “vagina”, “penis”, “piss” etc.? This is no coincidence. And, this came about with great speed.

In the early 1960’s as Uranus was approaching conjunction (lined up) with Pluto, we found great change happening in our sexual vernacular. As of October of 1965 when the two lined up exactly, the sexual revolution was well on its way. Even such innocent shows as “Laugh In” started to stretch the limits of language to this rather puritanical country. Certainly, by ’65 and ’67, the summers of love were well on their way and the old fogies just had to give up; the youngins were going to shake what they had and that was that. The cat was out of the bag and sooner or later, Ed Sullivan just had to photograph Elvis from his waist down.

You might ask why Uranus and Pluto are the planetary symbols here. I’m not saying I’m pro or against any particular word, but here is how it came down. Uranus’ job is to loosen up the society, to be freer. Yes, freedom also runs close to downright vulgarity if we don’t watch. Pluto, ruler of sex, well, enough is said there. So, when the two lined up, all kind of things became acceptable… I prefer a bit of mystery myself.

Nevertheless, 47 years later, Uranus and Pluto changed from being straight in line to a right angle relationship. This brings back and tests the conjunction of 1965. It is my opinion that a sexual revolution can be healthy or unhealthy as is being displayed with the derogatory abuse of the word “bitch” in the past few years. Heck, “dame” was a rather racy word not long ago. Are we liberating in conjunction with how love expands, or is it simply disregard for others and a sure sign of social decay – in a big way?

When we examine the sexual/vulgarity/off-colored words of late, we see a fascinating liberation of almost all “* words.” Will the censors “beep” become a thing of the past? Perhaps sooner than we think. And it appears more and more that TV shows are bumping up closer and closer to that 9pm “the children are still up” curfew, and not just on cable.

As I was researching this, it came to me that almost every letter of the alphabet has been treated by more and more freedom in our common vernacular.

“A” is for “ass,” and we hear it everywhere, and I don’t mean a donkey-like animal.

Goodness, not only is “bitch” THE “B” word now, but we must make sure to drag it out into “beeyatch” or so. No one did it better than Jesse on “Breaking Bad.”

I’m not going to even touch the “C” word, that’s going to take a while, and I hope for the

sense of respect and decency that we don’t go there. There’s another long “C*********” which is even more common and it’s finding its unobstructed path. And “C”hrist is a state of consciousness, not a person.

Mind you, I’m not talking about rap recordings which have long ago dispersed of any and all limitations. Let alone respect for the female race. Yet, millions buy the stuff.

We are hearing those who are slipping in the “D” word more and more, to many people’s dismay. Don’t we have any imagination left? Is that what makes a comedian funny? Bill Cosby never needed it. And, after all, George Carlin was simply making fun of all of our words and hypocrisies.

Can’t think of much going on with “E”, but, that leads us right up to the piece d’resistance, the glorious F-BOMB. Well, it’s simply everywhere and bulging its way into about everything. Granted, it might be the most flexible and useful word ever coined, but, it’s not even listed in some dictionaries. Certainly, many can’t say a sentence without bombing it. Geesh.

“G** Damn” gave us religious friction for many years, and many souls have already been sentenced to Hell forever – with no chance of parole – but, it’s here to stay.

“H” is hirsute, “I” goes with commercials about IUD’s. “J” which stands for jollies can be stretched into just about any sentence. And there is Jesus. “K” leaves me empty, but if I hear one more person use the word “L”ike 3 times in every sentence! I mean….!  “He was LIKE looking at me” is really much the same as “He was looking at me”, is it like not? My God, when is LIKE going to go away, and I’d love to meet the first Left-coast individual who started this contagious, meaningless word going around. Like, you know?

We’re all simply SICK of the “N”-word, so I’m just going to skip it.

“O” does nothing for me, but the “P” word is definitely picking up favor – another nice way that we refer to others. Of course saying “penis” out loud now really makes you cool. It’s like, well, you know, like were in like eighth grade or so.

Even “Q” has been tacked on to “LGBT” like Neil Young was to CS&N, and now we have “LGBTQ”. What’s next for that one? Remember Rodney King, “Why can’t we all get along?”

“R” seems safe, but the “S”-word is being dropped everywhere, as if we can’t do without that one. It’s another great word that has multifarious purposes and can be injected anywhere just like the “F”bomb and “like”. We can really get articulate if we use all 3 in one sentence. The “S”-word has many variations.

The little old “T”-word has George Carlin tickled in his grave, but the word “boob” is everywhere. Of course, there is another “T”-word we hope remains silenced, such a nasty word.

“U” seems ok for now, but oh how Washington, D.C. has embraced the wonderful “V”agina word. And I don’t think it’s because it sounds like Virginia either. Wise old officials have somehow invaded that territory, even though they know nothing about it. Congressmen, just shut up and leave women’s vaginas where they belong; not in your legislation.

“W” is pretty popular in England, but is pretty harmless for the time being here.

“X” simply matters in proportion to how many you use in a row, and I’m not talking about Roman Numerals.

“Y” seems okay and “Z” simply stands for what a ZOO we have created. It’s not the media, it’s our media; they reflect what’s inside of us, do they not?

The real archetypal purpose of the transits of Uranus and Pluto is to loosen us up; leading us away from dictatorial frameworks. Pluto’s job is to make us braver and more meaningful. I fail to see how lifting the restraints off of many of these alphabet characters has made us any better, and if anything, has made us much worse. Granted, Uranus and Pluto are both very harsh energies, but I have to contend that most of the liberation and social reform of the sixties were harmless, natural and life-supporting. What I see now is a society that is meaner, less respectful of each other and simply frustrated and angry. Watch most TV shows that aren’t “reality-based” or a sitcom, and you will see most of characters treating each other like “s***”.

May you find your Starself!

2014 Rick DiClemente – starself.com © – All rights reserved
PERMISSION MUST BE GRANTED BY THE AUTHOR IN WRITING FOR USE IN ANY WAY.

Author of “The Exquisite Zodiac”