Watch Out for Mars! 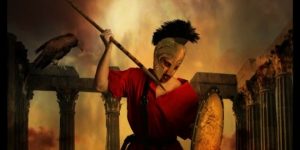 I tell my students over and over, “Watch out for Mars!” I don’t mean, duck your head either. In astrology, Mars is the instigator. It makes things happen. Since it is very blunt and aggressive, it can trigger events that are likewise. Mars travels quickly; going around the zodiac once every 2 years and that gives it lots of time to hit lots of things and get into lots of trouble.

Mars wants action. Therefore, if you are acting toward your goals, your experiences with Mars will probably not be too bad. However, if you are shying away from confrontation or dealing with matters that you know you must, watch out. Mars triggers what the other planets are doing or “promising.” Let me give you an example.

Let’s imagine that you have the Moon at 17 degrees of Gemini. Since the Moon represents your feelings, your family, and many other factors, it’s a very sensitive point. If Mars comes transiting over it from 17 degrees of Gemini, Virgo, Sagittarius or Pisces, it will conjunct, square or oppose the natal Moon. This more than likely will make you quite irritable for about 2 days, but, essentially shouldn’t be too bad.

HOWEVER, let’s say that, AT THE SAME TIME, transiting Uranus is sitting around 16 degrees of Sagittarius setting up an era of Uranus opposite your Moon. Since Uranus travels rather slowly compared to Mars, it will exert a great deal of force upon the natal Moon for quite a while. Uranus wants the Moon to get unblocked. Moons can get very blocked from childhood roles we play and never outgrow. It’s OUR Uranus that wants the Moon to express itself or get things off of its chest! Since the Moon rules Cancer and the Cancerian parts of the body are the breasts and stomach, we can certainly feel this type of tension in our chest area.

So, while Uranus is consistently applying pressure on that Moon, we humans tend to want to let things slide again and again until “one day…” And that day will be when transiting Mars gets involved too – as an agitator. I’ve told you before – Mars wants ACTION. When it gets near the 16th degree of Gemini, Virgo, Sagittarius or Pisces, IT WILL TRIGGER THE TENSION BETWEEN URANUS WHICH HAS BEEN SITTING THERE; ALL GANGING UP ON THE NATAL MOON. Do you see? Boom? That’s NOT what you want. That’s why the events of late July with transiting Pluto and Mars were opposite each other brought about global and individual tensions.

When you are not an astrologer, you simply don’t know where Mars is and what it’s about to do. Keeping an eye on Mars, even if you are a novice will save you lots of Excedrin. It is very common that fevers set in for about 2 days (this pattern is almost assured with babies you are raising; most times you can let it slide); you tend to overdo it – straining your muscles; conned by Mars into thinking that you actually have extra amounts of adrenalin, etc. Burning the candle at both ends is very common during these times and must be guarded against. ALWAYS stop short during a Mars’ transit. You don’t have as much energy as you think you do. It is very important that during Martian times that we assert but not go too far into aggression. Our “opponents” during those times are more formidable than we might initially think.

You don’t have to be afraid of Mars, but only if you are aware of the tensions building and subsiding in your natal chart. Again, another example: If you are having a lot of trouble in your marriage and transiting Mars is headed for the cusp of your 7th house (the marriage house), watch out for barbed arguments. Be clear: Mars means action but more importantly Mars means DON’T STUFF IT – ACT ON IT.

You don’t have to be Houdini, merely acting when something is on your chest will alleviate much of the built up, or festering, energies.